There has recently been an increased effort to develop new optical tools that can non-invasively monitor our own brain activity. A cheap, portable and accurate neural recording device will open up many exciting applications in the future, both clinical (e.g., epilepsy monitoring and treatment) and for everyday use (e.g., how much are you concentrating right now?). Example technologies that are currently being developed for these kinds of applications include diffuse optical tomography (DOT), which now can penetrate deeper into tissue via time-gating with single-photon avalanche diode (SPAD) detectors.Time-gated SPAD technology is currently being developed for LIDAR detection within autonomous vehicles, and now also to open up new and interesting consumer applications in the new iPad Pro, for example.

A second related technology that can monitor deep tissue blood flow is termed “diffuse correlation spectroscopy,” or DCS. While it sounds pretty complicated, DCS works in a very similar manner as DOT. In a typical DCS setup, biological tissue is illuminated with highly coherent light and the scattered field is measured with a single photon-counting detectors placed several centimeters away from the input source. Dynamic events, such as blood flow or other small movements, are then estimated by calculating and processing the scattered light's temporal autocorrelation. 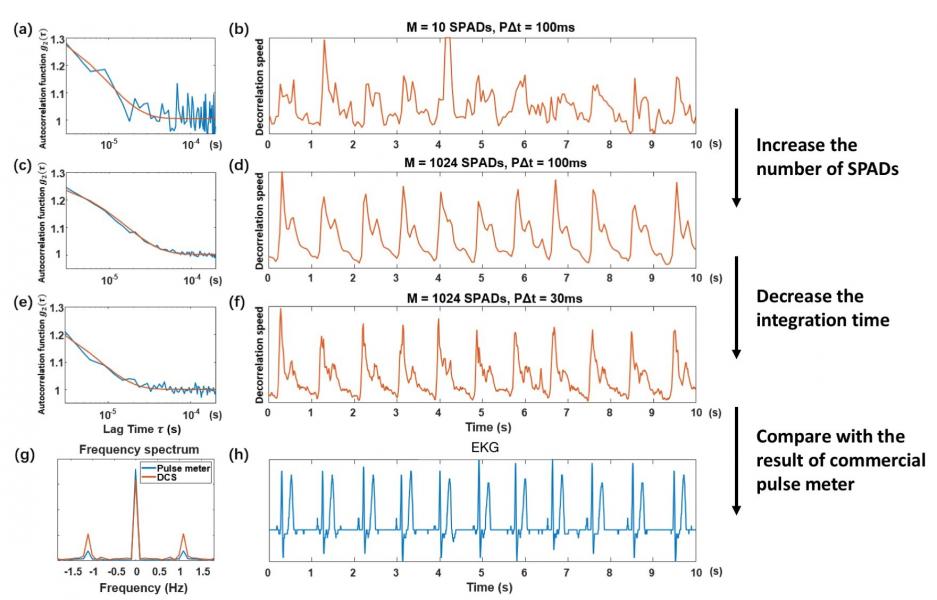 Due to forward-scattering nature of biological tissue and incident power safety limits, current DCS systems are severely photon-limited when outfitted to measure brain dynamics, and typically must integrate measured photon counts over a second or more to overcome the noise floor.We have recently overcome this fundamental limitation by simultaneously acquiring single-photon measurements with thousands of integrated SPAD detectors, allowing us to now measure high-fidelity dynamics occurring over 10 mm deep at 10 ms sampling rates. To the best of our knowledge, this is at least 10X faster than anything demonstrated in prior work. We have recently quantitatively demonstrated mm-scale sensitivity with our new technique, and have also obtained in vivo blood flow measurements from the adult forehead at 30-100 Hz to clearly resolve human pulse dynamics and to help differentiate between simple behavioral tasks. Please check out the following video to learn more!

Deep Image Prior for 3D imaging